RawFoodLife, LLC
Home About Us

A raw food lifestyle starts with a diet of raw, uncooked, unprocessed, and organic fruits, vegetables, leafy greens, nuts, seeds, sprouted grains and beans and dried fruits. There are also some other foods that are included in this diet such as young coconuts, seaweeds, raw carob, cold pressed oils and fresh or dried spices and seasonings.

Heating your food over 118°F kills the  essential enzymes in food that help you with digestion and absorption. Cooking can also diminish the nutritional value and living energy of your food. But the worst thing is that heating food actually breaks down the chemical structure of the food, replacing most of delicious nutrients with a variety of toxins and carcinogens formed by the heat.

So cooking is a bit like doing a chemistry experiment in high school. Due to the high heat, cooking creates new toxic substances in your food. Most of these come from proteins reacting with carbohydrates. Some of these substances are known to cause cancer and other so-called “diseased of civilization.”

However, the benefits of eating a balanced diet consisting of live, raw foods include increased energy, improved digestion, healthy weight loss, improved appearance and eliminating the risks of heart disease, diabetes, cancer and the other diseases of civilization.

Ultimately, however, raw food isn’t even about the food! You will soon discover another,  more important side to a lifestyle based on raw, whole food. I call that “getting in touch with the whole being” inside you. A toxic, cooked food lifestyle actually inhibits your ability to be fully in touch with your inner being. Real physiological processes can actually become blocked — mental, emotional and spiritual blockages. As you clear these out you can become a more sensitive, happy individual because that is the true nature of a whole being. THAT is who we are already are when we aren’t living an unnatural, unhealthy lifestyle. Over time, a live, raw, whole food lifestyle, with the help of this web site, will help you experience that for yourself.

I didn’t decide to share my experience of raw foods just because I am interested in health and healing, though of course I am.. But I am really out to transform myself, and then the world! I believe that is the power of a Whole Being. The toxins in cooked and processed foods, however, block your natural power.

There Was No Cooking in the Garden of Eden … 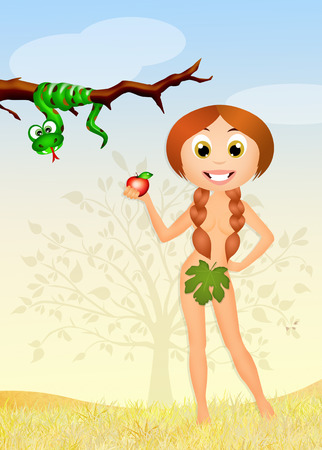 I often think that cooking was the evil knowledge given to humanity by the snake in the Garden of Eden, a symbol of fire in many cultures. Perhaps the snake gave Eve a “baked apple.” Until that one biblical moment, there was no fire in the Garden. They ate, as the bible says, right from the plants and trees. So Adam and Eve were the perhaps the first “Whole Beings.”

But then the baked apple suddenly gave them something more toxic than nourishing. Now they had received “knowledge” of cooking and fire — and all the  problems associated with dead food — from shame about their bodies and declining health to killing other living being and the loss of their awareness of the inner ‘whole being.’ Toxins robbed them of energy. With less energy, their ability to think clearly was hampered. With the body in survival mode, survival instinctively becomes more important than caring for others. With imbalanced brain functions, they may have become less emotionally balanced, more prone to anger, depression, anxiety or violence. These are just some of the short-term ripple effects of an unnatural, unhealthy lifestyle and diet. There are many more, as well as many long term effects from cancer to heart disease. In other words, that one single act could have been enough to turn the Garden of Eden into our modern “civilized” world. It was the first “sin.”

Death creates death. People that thrive on dead food thrive on dead thinking, dead beliefs, dead politics, dead economics, dead lifestyles and the means of creating more death. On the other hand, life creates life. You can choose to be fully alive, with the kind of conscious life fostered by whole, live foods. Without the sedative effects of toxins found commonly in cooked foods, you’ll discover more health, clearer thinking, more awareness, purer consciousness and much more. And this isn’t some new age psycho-babble, it is proven in scientific studies, some of which I’ll share on Facebook in my Timeline or Notes, as well as on this web site.

It’s not just a fact, its common sense for people that have all the facts. Dead food kills. Live food gives life. And the good news is – for the time being anyway – you still have the Freedom to choose!

I’ve a vegetarian or vegan for over 25 years. I studied nutrition in the 1980’s at U.C. Berkeley while I was a nutritional writer for the Shaklee Corporation. I discovered raw food in 1995 at the Optimum Health Institute of San Diego, co-founded by Anne Wigmore and Rachel Solomon more than fifty years ago. I originally was a guest for several weeks. Then, after feeling better than he had for years, I decided to stay on as a volunteer and ended teaching there for over 6 years. In 2001 I moved to Florida where I taught raw food classes at the New Life Expo and Wild Oats stores for several years. I created the first version of this web site in 1996. I currently live in Fairfield, Iowa.

Whole Food Whole Being — the Philosophy of Raw Food!