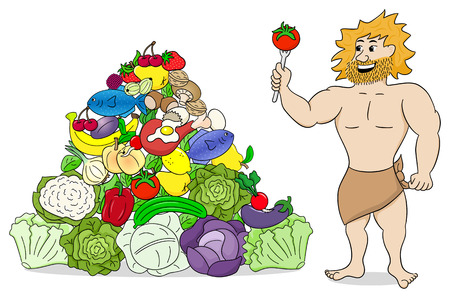 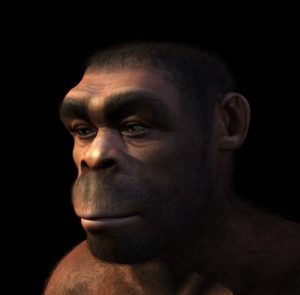 catching wild animals isn’t easy with your bare hands or even a simple spear. For survival, primitive man later added meat products for a huge variety of reasons, like trying to survive in Alaska. This varied depending on location. In warmer climates, prehisotirc man probably ate less meat, or none at all. In colder areas, where plants were often not available, man learned to fish and hunt. When our survival is at stake, we ignore the health consequences of a meat-based diet. But primitive men paid a heavy price for this, since they usually died rather young, around 25-35 years of age.

Meat eaters like to point out that the earliest cave paintings seem to show hunting scenes. However, that turns out to be wrong. Cave paintings actually show images of large wild animals, such as bison, horses, aurochs, and deer — not actually the animals they hunted at all. The species found in cave drawings were not the prey animals found in associated bone deposits. Cave drawings also showed tracings of human hands and abstract patterns, called finger flutings.

Meat-eaters also argue that cancer was actually rare in early man, so they conclude that eating something like a “Paleo Diet,” which includes meat, is fine. In actuality, we cannot tell that cancer was rare from the fossil record since most cancers are found in internal organs which wouldn’t be preserved in fossils. Paleolithic-era humans may have been fit and trim, but their average life expectancy was in the neighborhood of only 25-35 years, which is also too young for many cancers to show up anyway. Also, paleolithic man ate ancient foods which are either unavailable now or inedible by today’s standards! Modern apples, dates, figs, and pears aren’t nutritionally equivalent to their Stone Age ancestors. Selection by humans has made them larger and sweeter, and probably caused many other chemical changes. Ancient man also ate plants that you can’t find at a grocery store, like ferns and cattails. So you couldn’t really eat a Paleo Diet today even if you wanted to!

Modern man, Homo erectus, has teeth that shows much coarser wear than those of his extinct ancestors, Australopithecus and Ramapithecus, whose fossil teeth suggest they ate mainly fruits. So most scholars who study early prehistory today are convinced that fruits, nuts and perhaps tubers, dug up with simple tools, were the mainstay of life.

Today, we have medical intervention so we can live a much longer life, despite the fact that there is a huge price we pay for that in terms of cancer rates, osteoporosis, Altzeimer’s – you name it. Animal products are associated with numerous health problems and many of today’s “diseases of civilization,” as is clear in the citations above. It is fine if you choose to eat meat, however. There are numerous reasons to choose any lifestyle, from personal tastes and habits to karma. I invite all to consider the possibilities without judgement.

One of the main issues meat eaters throw in the face of vegans is the lack of vitamin B12 in a vegan diet. However, meat eaters are actually MORE likely to have a B12 deficiency than vegans– about 1 in 6 meat eaters are B12 deficient themselves! You see, animal products are actually a really poor source of B12 since they are normally COOKED! Cooking actually changes the chemical structure of foods, creating toxins and destroying many nutrients. And a cooked food diet also weakens the digestive system. But what if you are a raw foodist?

B12 Recommended Daily Allowances (RDA’s are based on what the average person needs). And guess who is average? People who eat cooked foods that also may smoke and drink! Why is that, you may well wonder?

The answer is simple – commerce!  It is often in the best interest of corporations to exaggerate our nutritional requirements. The typical studies they rely on actually do NOT apply to a healthy raw vegan. Though factors like metabolism or stress can cause our needs to vary, all humans need very little B12.

Plants don’t make B12.  Neither do animals. B12 is made by bacteria in the guts of animals, which is why meat products have B12. Our herbivore primate cousins get all they need consuming bugs, dirt, and feces in their diet. We also may once have gotten all the B12 we needed by drinking out of natural mountain streams or wells. But today we chlorinate water to kill the microbes. That prevents us from getting cholera—but it also prevents us from getting B12. So in our modern world we all need to find a reliable source of B12. Fortunately, the daily requirement for B12 is very low.

In the American Journal of Clinical Nutrition has reported that only 1 microgram of B12 is required per day for the average person – a cooked food, meat eater! But a healthy raw food vegan usually needs less B12 because cooking has not damaged the nutrients in their food!

B12 deficiency is actually very rare since it is in many fortified foods anyway. Its generally absorbed better from supplements like nutritional yeast. Look for nutritional yeast fortified with vegan B12, such as Red Star, which you can get by the bottle or in the bulk section of your natural food store.

We lose zinc through exercise and, for men, sex. So men are more likely to be deficient in zinc than women. Zinc is used for making collagen male sex hormones like testosterone. Zinc in animal products diet helps you feel stronger and more sexual. This mineral is found in a wide range of plant foods, and many studies show that vegans have intakes on a par with omnivores. But zinc absorption from plant foods can be low and can vary a lot, from 8% to 32%.

There is no evidence that becoming vegan cause a zinc deficiency. But zinc is needed by the body for a lot of physiological processes. So to be safe, supplement with a few extra milligrams of zinc. Since no single plant is naturally high in zinc, a diet based on a variety of whole foods can meet needs.

1 milligram of zinc is provided by:

Here are a few ways to enhance absorption of zinc:

·  Choose fermented foods.
·  Eat some sprouted legumes and seeds.
·  Soak or sprout grains.
·  Supplement with an algae based omega-3.

By eating on the lowest part of the food chain, you avoid most or all of the problems of eating from the sea (mercury, dioxins, etc). and still get the DHA form of omega-3.

Whole Food Whole Being — the Philosophy of Raw Food!

Robert Ross - January 3, 2017
0
My Raw Food Philosophy & Choosing to Live Consciously. Raw food (sometimes called live or living food) is food that has not been cooked...

Matthew Monarch - December 1, 2015
0
With the change of seasons, winter vegetables are beginning to be more prominent at farmer's markets.  For many, Fall is their favorite season --...