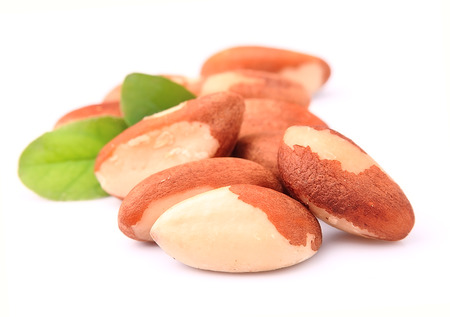 Selenium is a trace mineral found naturally in soil that also is found in certain foods and in small amounts in water. Selenium prevents many diseases so is vital for the body as it helps with immunity, has antioxidant activity and plays a major role in a healthy metabolism. Consuming plenty of naturally occurring selenium prevents disease, has antiviral effects, is essential for male and female fertility and reduces the risk of cancer, autoimmune and thyroid diseases.
— Lancet, 2012 Mar 31;379 (9822):1256-68. doi: 10.1016/S0140-6736(11)61452-9. Epub 2012 Feb 29.

How Selenium Benefits Your Body 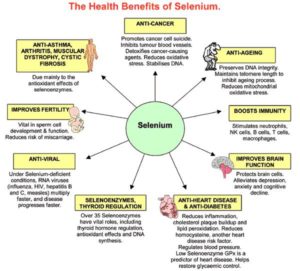 Selenium prevents many diseases because it increases antioxidant capabilities and the quality of blood flow, therefore enhancing the body’s resistance against disease and stress. Selenium’s role in antioxidant activity lowers free radical damage and reduces inflammation. Selenium also helps prevent common types of cancer, fight off viruses, defend against heart disease, and slow down symptoms of several other serious conditions like asthma.

Whole foods are the best sources of selenium, especially when these foods are handled and prepared in a delicate way, since selenium can be destroyed during processing and high heat cooking. Natural foods that are high in selenium include Brazil nuts, eggs, liver, tuna, cod, and sunflower seeds, in addition to poultry and certain types of meat.

Selenium deficiency is uncommon in the U.S. However, conditions like HIV, Crohn’s disease and disorders that impair nutrient absorption are associated with low selenium levels. Selenium deficiency is also linked to Aids and Ebola. An organic, raw food diet is rich in selenium, especially Brazil nuts — one of the best sources in the world!

Many lessons can be learned from the HIV virus since both of these viruses mutate quickly since there isn’t as much error-checking with RNA as there is with DNA. Both viruses thrive in West Africa in areas known to have selenium-deficient soil. Both make selenoproteins, which contain selenium bound as selenocysteine. When the infected person has a high selenium status, as well as a high antioxidant state, viral replication is slowed. But when selenium is low or deficient the virus multiplies causing more mutations. Experiments with animals have shown that fairly benign viruses can mutate into much more virulent viruses when a host is selenium-deficient. — Taylor EW, Ramanathan CS. Theoretical Evidence that the Ebola Virus Zaire Strain May Be Selenium-Dependent: A Factor in Pathogenesis and Viral Outbreaks? J Orthomol Med. 1995;10(2):131“8. Available from: http://orthomolecular.org/…/articl…/1995-v10n0304-p131.shtml[/note]

A follow-up study found that a combination of B vitamins, vitamin C, and selenium cut the risk in half of HIV-positive patients in Botswana from a critically low CD4+ T cell count, or from progression of the disease. — Baum MK, Campa A, Lai S, Sales Martinez S, Tsalaile L, Burns P, et al. Effect of micronutrient supplementation on disease progression in asymptomatic, antiretroviral-naive, HIV-infected adults in Botswana: a randomized clinical trial. JAMA. 2013 Nov 27;310(20):2154“63. Available from: http://www.ncbi.nlm.nih.gov/pubmed/24281460

Today, low selenium status is accepted as a risk factor for HIV.

Selenium was used during an outbreak of hemorrhagic fever in China to treat fast progressing and severe cases. Mortality decreased from 100% in the untreated group to 36% in the treated group for the fulminant cases and from 22% in the untreated severe cases to 0% in the selenium-treated severe cases. — Hou JC, Jiang ZY, He ZF. [Inhibitory effect of selenium on complement activation and its clinical significance]. Zhonghua Yi Xue Za Zhi. 1993 Nov;73(11):645“6, 699. Available from: http://www.ncbi.nlm.nih.gov/pubmed/7907268

So, selenium has already been successfully used to prevent depletion of selenium in response to hemorrhagic fever. Doctors noted, of course, that it is better to begin supplementation before the immune system is compromised.

For the last 25 years the average daily selenium intake has fallen from something like 60µg/day to less than 35µg/day in some areas. Selenium content of food is largely dependent on location and soil conditions, which vary widely. The average daily intake in the U.S. is 125 mcg per day. Populations of the Eastern Coastal Plain and the Pacific Northwest have the lowest selenium levels, averaging between 60 to 90 mcg per day, which is still considered to be adequate intake.

This Includes the total amount of selenium you get from foods and supplements. In studies on selenium for prostate cancer prevention, men took 200 mcg daily. The safe limit is 400 mcg a day in adults. Anything above that is considered an overdose.

Whole foods are the best sources of selenium. The mineral may be destroyed during processing. Taken at normal doses, selenium does not usually have side effects. An overdose may cause bad breath, fever, nausea, and liver, kidney and heart problems. Selenium may also interact with other medicines and supplements, such as antacids, chemotherapy drugs, corticosteroids, niacin, cholesterol-lowering statin drugs, and birth control pills. People at high risk of skin cancer should not take selenium supplements. People at risk for type 2 diabetes who took 200 mcg a day of selenium were 50% more likely to develop type diabetes so should discuss the risk with a doctor.