How to Use Spices to Activate the Endocannabinoid System

Since 1990, when the endocannabinoid system was first discovered, the cannabis industry has been in a race to find the latest breakthroughs for using cannabis in medicine. This race has dramatically sped up recently as non-psychoactive cannabinoids such as cannabidiol (CBD), cannabichromene (CBC), and as more started showing a lot of promise. Every discovery clearly demonstrates the potential of phytocannabinoids to affect the endocannabinoid system — and just how important it is to our health and well-being.

Around 2008 researchers in Zürich published evidence that some compounds in common herbs and spices could be just as beneficial for the endocannabinoid system as CBD. Some researchers believe the key compound is  a terpene or a terpenoid, usually responsible for aromas. Others refer to it as a food-based cannabinoid). Apparently, these are often just as effective as cannabis based cannabinoids for stimulating the CB2 receptors in our endocannabinoid system.

This compound, beta-caryophyllene (EBCP), activates the CB2 receptor just like the cannabinoids in cannabis. It’s believed that food-based cannabinoids offer new alternatives  for therapy. EBCP is believed to affect pain perception and inflammatory responses. One new area of study is its potential to increase the effectiveness of chemotherapy.

The most exciting thing about this is just how many herbs and spices contain high quantities of EBCP and are easy to find. Below is a brief review of eight spices that have been found to contain EBCP. Please remember that cannabis sativa contains from 12% to 35% EBCP.

Black Ashanti contains 58% and White Ashanti Contains 52% EBCP. This pepper is well known, especially for treatment of diabetes. It has antibacterial characteristics and has been shown to target staphylococcus aureus infections (staph) and the e.coli bacteria.

Indian Bay Leaf contains 25% EBCP. Common in North Indian food, this plant has a deep Ayurvedic tradition in India. Studies show it is an antioxidant and can help with Type 2 Diabetes.

Grains of Paradise contains 22% EBCP. A variety of cardamom originally from West Africa. This may be harder to find and more expensive than others on this list. They have been found to have antioxidant and anti-inflammatory properties, can treat diarrhea and are also antimicrobial.

Black pepper contains between 7% to 19% EBCP depending on the sample tested. Scientific evidence suggests black pepper can help fight against colon cancer, and it is also  antibacterial.

African Basil contains 14% EBCP. African basil has been found to have the highest EBCP content of all the varieties of basil tested. Basil is also considered one of the strongest ingredients in herbal medicine with powerful antiviral, antibacterial and anti-inflammatory properties.

Ceylon Cinnamon contains between 7% to 11% EBCP. Ceylon cinnamon can potentially manage blood sugar and even out unbalanced metabolisms. It may also reduce high blood pressure and help with weight loss.

Rosemary contains between 1% to 8% EBCP. Rosemary has been distilled into a volatile oil for in perfumes and medicines for ages. In medicinal applications ,rosemary can be used to soothe upset stomachs, treat cold and flu symptoms and in some cases can act as a stimulant.

Caraway contains 8% EBCP. There is evidence that caraway seeds have been used by humans for about 5,000 years as a flavoring, food-preservative and medicine. As an essential oil, caraway has some important medicinal benefits including antioxidant, antifungal and antibacterial properties. 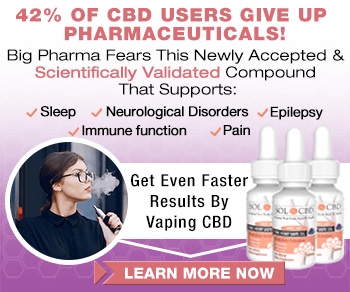 One great pace to start is with SolCBD – terrific, one-of-a-kind, organic CBD products. I like SolCBD’s vape product — the best liquid vape I’ve found. It contains CO2 extracted CBD derived from hemp, with all the important phytonutrients, enzymes & vitamins — in a vegetable glycerin base, so there’s never any propylene glycol.

SolCBD is completely available to your body  because it bypasses your the liver and is absorbed into your bloodstream almost immediately. So you get four times as much CBD in your blood with 50-60% bioavailability for all the results you expect only with a much smaller quantity.

Robert Ross - October 9, 2016
0
The Science of Microclusters Given how important water is to life, there are amazingly few actual studies on the nature of water and the science...

Protect your body from cancer and free radical damage!

Matthew Monarch - October 9, 2015
0
Watercress is the perfect powerhouse vegetable to protect you from free radical damage! Anyone who is serious about their nutrition and cancer protection has probably...

Robert Ross - May 27, 2017
0
These delicious raw food salad recipes are perfect any time of the year. Remember, only use fresh, raw and organic ingredients. Artichoke  Dijon Penne 2-1/2 ...

10 Scientific Studies that Prove GMO Food is Harmful to Your...